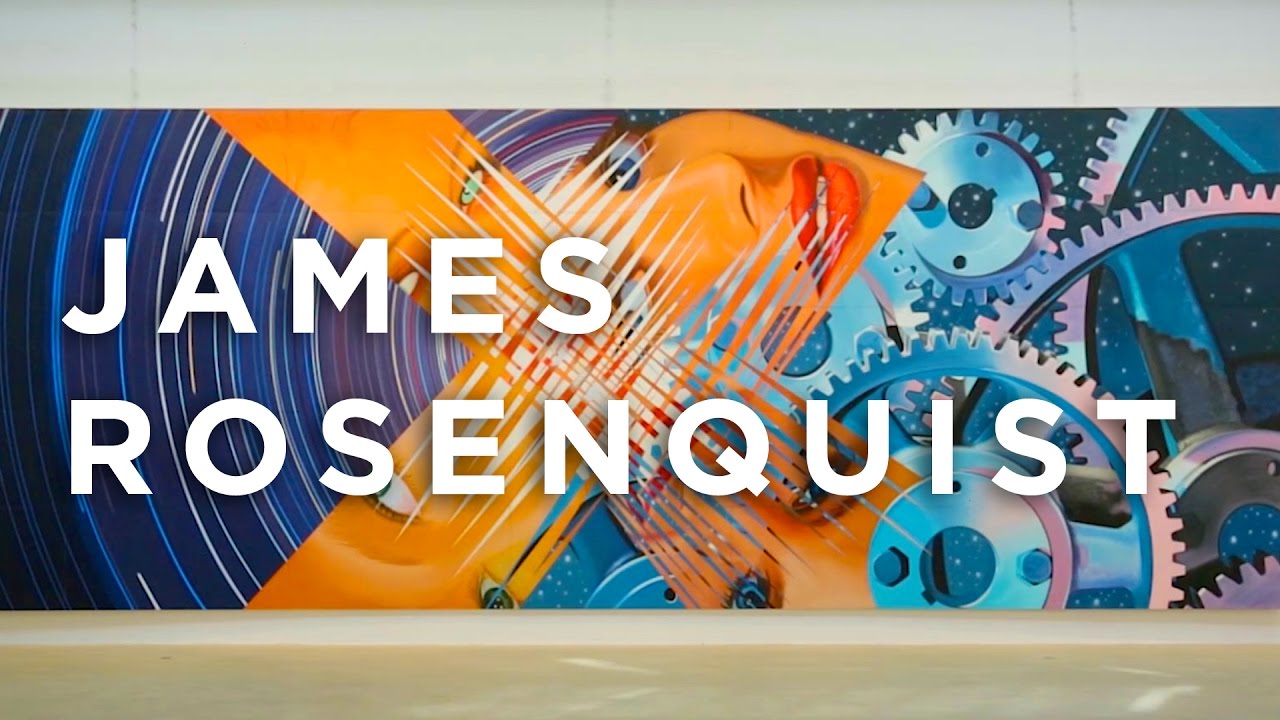 This ambitiously scaled exhibition comprised around 33 works, mainly loaned from the artist and private collections. The selection presented highlights throughout four decades of the artist’s œuvre, starting from the 1970s.

A masterpiece of the exhibition was the fourteen-meter long and five-meter high Four New Clear Women (1982). First exhibited at Leo Castelli Gallery in 1983 and selected for the Art Unlimited section of Art Basel in June 2016, the painting was a fine example of the artist’s use of monumental scale. The splintered and interlacing imagery, characteristic of the works from this decade, was inspired by the saw palmettos that grow on Rosenquist’s Florida property. The technique of featuring two pictorial planes at once represents a form of condensation, allowed for more visual information to be included in a painting. The title of the painting was a play on words: were the female political leaders of the time (notably Margaret Thatcher, Indira Gandhi, and others), representing ‘four new, clear women,’ clear about nuclear threat, or are they ‘four nuclear women’? The question left audiences with the ambiguity of whether or not they will be warmongers or peacemakers.

The works of the 80s and early 90s represented a key stage in the development of the artist’s aesthetic, marked by his signature, crosshatched technique. The process was exemplified in his floral works, such as the painting Sky Hole (1989) from his Welcome to the Water Planet series. Along with his floral works, the artist developed a series of outer space paintings that recall hallucinatory dreams.

Rosenquist’s longstanding fascination with outer space is seen in his early 90s Meteor Series – with the meteor symbolizing the inexplicable. With these works, the artist paid tribute to famous painters such as Brancusi and Picasso, bridging the gap between Modern and Contemporary art.

From the late 1990s to the first decade of the 21st century, the motif of time takes centre stage in Rosenquist’s practice. The Speed of Light and The Hole in the Centre of Time series explored different aspects of the theme. Rosenquist was fascinated by Einstein’s theory of relativity, according to which a stationary spectator sees an event differently from a spectator traveling at the speed of light. Works from the Speed of Light series juxtaposed objects painted with trompe l’oeil precision and abstract, winding forms that recall waves of energy. Time Stops the Face Continues (2008) and Speed of Light Illustrated (2008) from The Hole in the Centre of Time series included motorized mirrors allowing for the viewer and surrounding space to be part of the work. Depending on the viewer’s position and speed, the paintings perpetually transformed. Rosenquist put into question our perception of time and whether we are in control of it or it controls us.

The starting point of most paintings was a collage of source material, a composition of drawings and found images, often distorted with the aid of a reflective metal cone and a photocopier. Gridding the colossal canvas, the artist translated the image directly by hand onto the canvas – using no airbrush or modern technology.

Simultaneously, the gallery exhibited around 30 rarely seen collages in our Marais gallery, whiched offered a glimpse into the thought process behind a finished painting. The pendant exhibition emphasised how these intimate-scaled works are not only a step in the working process, but are also works in their own right. Rosenquist writes: “Collage is still a very contemporary medium, whether it is done with little bits of paper or in the cinema. [...] In collage there is a glint...or reflection of modern life. For example, if you take a walk through midtown Manhattan and you see the back of a girl's legs and then you see out of the corner of your eye a taxi comes close to hitting you. So - the legs, the car - you see parts of things and you rationalize and identify danger by bits and pieces. It's very quick. It's about contemporary life.”

During the 1960s in New York, several notable exhibitions on collage and mixed media art were staged, providing historical context for the direction Rosenquist’s practice was taking. Curator Lawrence Alloway linked this new City Art of “junk culture” to Dada and Futurism, also considered as urban art. Alloway writes: “Junk culture is city art. It’s source is obsolescence, the throwaway material of cities, as it collects in drawers, cupboards, attics, dustbins, gutters, waste lots, and city dumps... Assemblages of such material come to the spectator as bits of life, bits of the environment. The urban environment is present, then, as the source of objects, whether transfigured or left alone.” To Rosenquist, the city with its cars, highways and appetite for consumption was an endless source of inspiration.