Even though I’ve followed the works of the painter Jonathan Lasker since I was a student, we didn’t get to know each other until his first exhibit with Cheim & Read in 2007. I recently read his Complete Essays 1984 – 1998 (Edgewise, 1998), just days before coming to see his last exhibit (January 7 – February 13, 2016), we decided to meet at the gallery to discuss his studio practice and thoughts about his paintings, which span more than four decades.

Phong Bui (Rail): I’ve been following your work since the late ’80s. I thought it would be playful to begin with a selection of words used by a few writers and critics over the years to describe your paintings. Let’s start with Tony Godfrey, who used words like “loogy,” “gunky,” “goofy,” “slodgily,” and “gloopy.” He also referenced Thomas Gainsborough’s use of a mirror for water, coal lumps for rocks, and broccoli for trees in reference to his late landscapes, which I felt was perfect.

Jonathan Lasker: Which were all true. It sounds strange, but Gainsborough used to literally set up those scenes with broccoli for trees. I guess there is something similar in my paintings, because I use abstract forms like objects or things in space—things that suggest other things that are animal or vegetable, animate or inanimate. I do remember Tony’s essay. I like the way he writes.

Rail: Were you conscious from the outset that, apart from landscape as a theme, there were also interior scenes such as—

Rail: Exactly, in which one can identify various silhouettes, like that of a TV set with antennas, an armchair, a sofa, a nude figure, and a spade symbol. They float against a flat background, partially filled with swirling marks. I liked Raphael Rubinstein’s description that it was painted with “deliberately unvirtuosic paint-handling.”

Lasker: Single Room Occupancy (1978) is another painting like that. It was in a previous show of early works at Cheim & Read in 2012.

Rail: True! Although except for the half of the table on the top left, and half of the bed, viewed from above on the bottom right, and the object with a leg hanging over the yellow table in the painting, one can say it’s both an interior scene and still life. So the three predominant themes are landscapes, still lives, and interiors.

Lasker: Except for portraiture, and religious or historical paintings, which I don’t do, these are pretty much the three different themes I can depict.

Rail: Which is half the subject matter of Western painting! [Laughter.] We can continue onward to Joe Masheck’s article Painting in Double Negative (Arts Magazine, January 1990), in which he used two terrific words to describe your work: “engineered disengagement.”

Rail: Or resisting the Lyrical Abstraction or Field Painting and Minimalism of the ’70s! I mean to say that the former went beyond the hand while the latter completely removed the hand.

Lasker: Those issues were the reasons I became a painter. I actually went to CalArts to become a painter. [Laughter.]

Rail: And you survived. 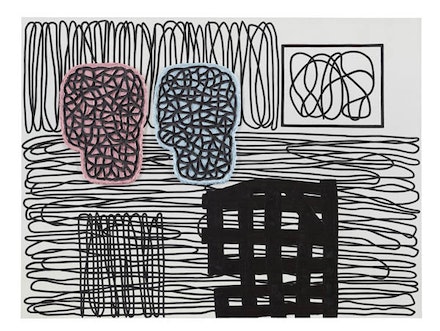 Rail: What sort of work were you doing then?

Lasker: The very first painting in this body of work “Illinois” was in fact painted there. I started out making paintings which were a little influenced by the Pattern and Decoration movement that was very prominent in the late ’70s. I was also influenced by two professors. One was Richard Artschwager—his thoughts about picture space interested me very much. So did his ideas about two-dimensionality versus three-dimensionality.

Rail: Which he certainly adopted in his work.

Lasker: Right. He made a matrix of pattern or surface that was two-dimensional then, at the same time, did these amazing interior drawings. Anyway, the other professor was Susan Rothenberg. Her horse paintings were very interesting to me, then and now. I should add that her paintings of heads, hands, and other body parts are under-appreciated.

Rail: Could you elaborate?

Lasker: I was interested in the tension between image and abstraction, how the mind could be engaged with a picture of a recognizable image while perceiving abstract space at the same time. That was in the air at the time, this figure/ground relationship. I took the idea of figurative form and put it on top of a pattern and that’s where the mechanics of these paintings began. It kind of all began at the end of my second semester at CalArts. I was only there for one year, in 1977.